FoulingCure is required for Particulate fouling.

Preventing particles from depositing on the plates and deteriorating the heat transfer.

Cleaning sequence is performed while the plate heat exchanger is in full operation and no energyloss or downtime – Cycle is every hour up to daily basis.

The FoulingCure-flow is provided by an external pump and the FoulingCure rinsing head is guided by a hydraulic cylinder. 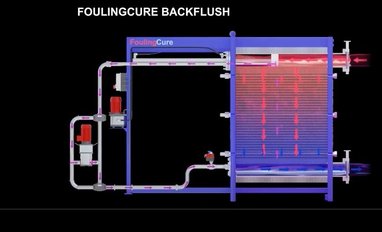 The Backflush modus is obtained by installing two extra valves along with the standard FoulingCure system.

FoulingCure with Back Flush and CIP

FoulingCure with Backflush in combination with CIP (Cleaning in Place) generates flow to flush away dissolved material and larger particles.

FoulingCure with CIP is required when having Biological & Chemical fouling or Precipitation - scale formation due to dissolved substances.

Using a traditional stand-alone CIP for cleaning a plate heat exchanger do is not always fully restore the performance. Dissolving solids or killed bacteria leaves a mix of dissolved solids and particles on the plates.

FoulingCure in combination with CIP generates sufficient flow to flush away dissolved material and particles for getting the plate heat exchanger back to 100% performance. 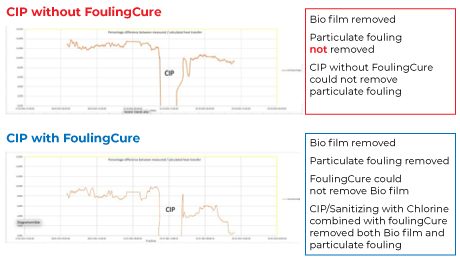 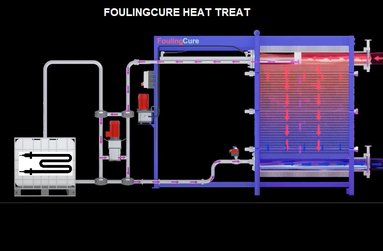 We keep them all Clean!